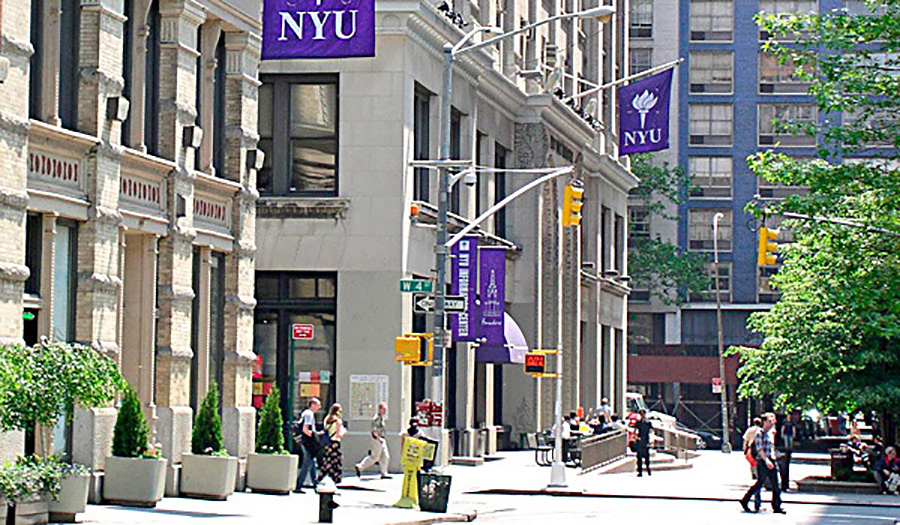 New York University comes in at #29 on the most recent U.S. News and World Report’s ranked list of National Universities. Founded in 1831, the private school currently enrolls 29,406 undergraduate students, including the largest number of international students at any American university. (28 percent of the students in the Class of 2023 are non-US citizens.) The school’s main campus is located in New York City, providing students with a fast-paced, multicultural, and distinctly metropolitan experience.

Many students are drawn to NYU because it offers, in the words of NYU President Andrew Hamilton, a “global, urban, rigorous liberal arts education.” NYU certainly does emphasize global interests, with degree-granting campuses in New York, Abu Dhabi, and Shanghai along with 14 study abroad locations. (Students hoping to study in additional locations can participate in exchange programs through one of NYU’s 11 partner institutions.) In fact, more than 3,000 NYU students study abroad every year—that’s more students than study abroad from any other American university!

NYU is also distinctly urban: the school’s main campus, located in Manhattan’s Greenwich Village, is integrated in the city itself. No borders separate the school from the rest of the city, and students are expected to immerse themselves in New York as part of their undergraduate education. Students can explore the city’s many museums, theatres, and music venues, including the Metropolitan Museum of Art, the MOMA, and Lincoln Center. NYU’s location also allows students to pursue jobs, internships, and research opportunities with some of the many organizations based in New York City. Students interested in media regularly intern with television studios, independent film companies, and publishing houses, while their business-focused peers can find opportunities at world-class financial firms. Those with an interest in medicine can visit NYU’s Langone Medical Center, which allows undergraduates to carry out hands-on biomedical research. Many NYU students also choose to live off-campus in city apartments, even though the school guarantees housing for all four years of undergraduate study.

In terms of coursework, NYU offers 17 schools and divisions, with over 230 areas of undergraduate study available. On the New York campus, these programs include:

Undergraduates can earn degrees through the first 10 of these programs, specializing in everything from humanities and sciences at the College of Arts and Sciences to hospitality and tourism at the School of Professional Studies. For students interested in performing arts, the Tisch School of the Arts is a particularly popular choice, as students are able to pursue conservatory-style programs in acting, dance, dramatic writing, and film and television while exploring the expansive New York City arts scene. The College of Global Public Health also offers ten interdisciplinary undergraduate majors in collaboration with other NYU schools. Students can pursue joint degrees in subjects ranging from Global Public Health and Social Work to Global Public Health and Food Studies.

For students with international interests, the Liberal Studies program also presents an attractive, interdisciplinary choice. Students enrolled in the program spend their first year at NYU studying abroad in Florence, London, New York, Paris, or Washington, DC. During their first two years of study, they take several core classes that consider the history of literature, arts, politics, and philosophy from around the world. As sophomores, students select a concentration that focuses on a particular theme within global studies, ultimately producing a senior thesis that serves as a capstone to the program.

Students who apply Regular Decision (applications due January 1) do not have to attend NYU if admitted. Their odds of admission are significantly lower, though. The overall admit rate for the Class of 2023 was 16 percent, though more than half of the class was filled with Early Decision candidates. For this reason, we recommend that students who are sure they want to attend NYU apply Early Decision.

Students can apply to NYU through the Common Application. To be eligible for admission, NYU asks students to submit one of the following: SAT, ACT (writing component not required), three SAT Subject Tests, three AP exam scores, an IB Diploma, three IB higher-level exam scores, or a nationally accredited exam that shows you completed your secondary education. Applicants for artistic programs in the Steinhardt and Tisch Schools that require an audition or portfolio are not required to submit standardized tests at all. In our experience, however, competitive students generally submit the SAT or ACT with writing AND three strong subject tests.  Students who have not completed at least three years of study where English is the sole language of instruction should also submit English language proficiency test scores (e.g., TOEFL, IELTS, etc.).

When applying to NYU, students will have the option to select alternate campuses or programs of interest. If you are not admitted to your first-choice campus or school, admissions officers will consider you for your second-choice selection. (It’s worth noting that students who apply Early Decision will not be required to attend if admitted only to their second-choice campus.) Alternate offers of admission are made most frequently to students who express a secondary interest in the Liberal Studies program.

Top Tier Admissions Can Help You Get Into NYU:

Ready to Apply to NYU? Try one these Top Tier options!