The building of the Class of 2021 has begun! Many schools saw an increase in early applications, Princeton was up 18 percent and Columbia, Duke, Dartmouth, and Cornell reported the largest early application pools in their respective histories.

All Ivy League institutions and many other top colleges have released their early admissions stats. We’ve compiled them below and will continue to update.

Early Admissions Stats In a Nutshell 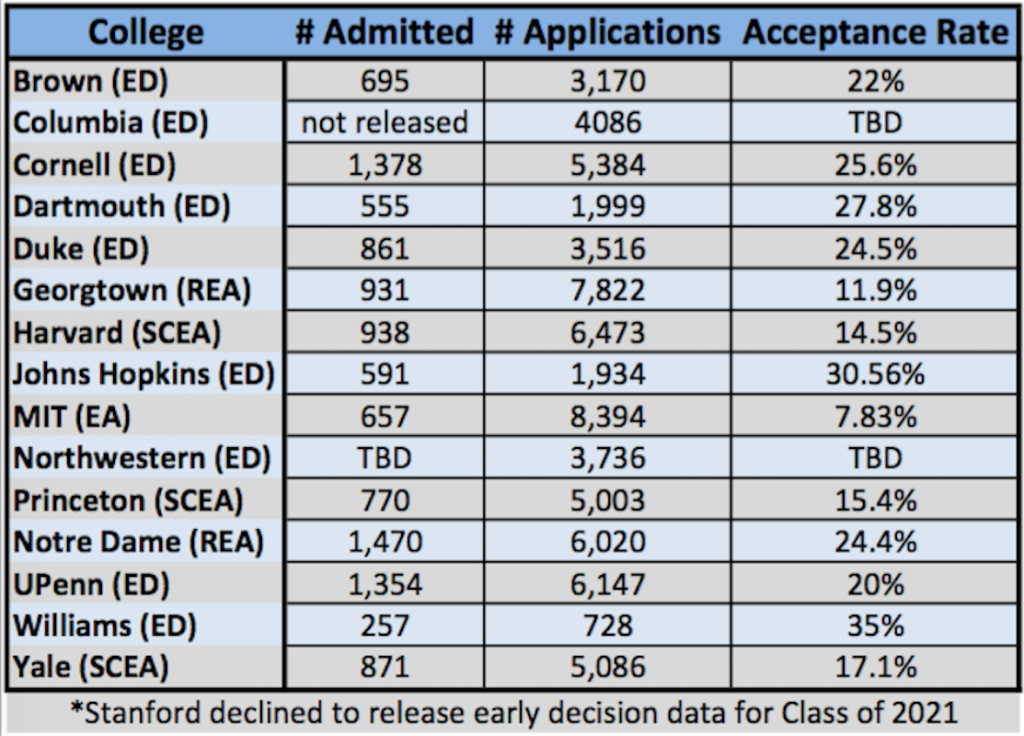 Cornell: A record number of 5,384 students applied early decision for admission to Cornell’s Class of 2021 with 1,378 acceptances representing a 10.3 percent increase from last year. This year’s numbers broke the record, set last year by the early decision Class of 2020. Cornell’s early decision pool has increased by 78 percent within the past decade. Of these applicants to Cornell, 25.6 percent were admitted — a smaller fraction than last year, when the University accepted 27.4 percent of applicants.

Dartmouth: Dartmouth accepted 555 students into the Class of 2021, selected from a record-large pool of 1,999 applicants. The admitted students will form approximately 47 percent of the incoming class. This year’s 27.8 percent acceptance rate is an increase from last year’s 25.6 percent. The overall number of applications went up by 3.7 percent.

Dickinson: Dickinson extends offers of admission to 203 Early Decision (ED) applicants for the Class of 2021.

Duke: A record number of students (3,516) applied early with Duke accepting 861 applicants into the Class of 2021 (691 into Trinity College of Arts and Sciences, 170 in the Pratt School of Engineering). This reflects a 24.5 percent acceptance rate, which is the second most selective early decision process in Duke’s history. These 861 students admitted through early decision will make up 50 percent of the Class of 2021.

Georgetown: Georgetown accepted just fewer than 12 percent (931) of its 7,822 early action applicants to the Class of 2021, a record-low rate being 1 percent lower than last year’s 13 percent. The early applicant pool increased by 11 percent from last year as well.

MIT: This year, 8,394 students applied for early admission to MIT, and early admission was offered to 657 applicants reflecting an early acceptance rate of 7.83 percent.

Northwestern: *UPDATED* Northwestern accepted approximately 26 percent of early decision applicants (a record high 3,736 in total), an increase of about 23 percent from last year.

Princeton: Princeton University has offered admission to 770 students from a pool of 5,003 candidates who applied through single-choice early action for the Class of 2021. The pool was the largest in the last six years, representing an 18.3 percent increase over last year’s early applicant pool. The admission rate was 15.4 percent. In 2015, the early admit rate was 18.6 percent.

Stanford: Declined to release early decision data for Class of 2021.

UPENN: Penn admitted 22 percent of its early decision applicants to the Class of 2021 this year, slightly lower than last year’s rate of 23.2 percent. A record-breaking total of 6,147 applications were submitted in the early decision round. Of that number, 1,354 were accepted. The number of early decision applications increased by 7 percent from last year, and has grown by 28 percent in the last four years since the Class of 2017 applied. Penn typically admits around half of its total class in the Early Decision round. Last year, 55 percent of the total 2,445 spots available were filled by Early Decision applicants.

Williams: Williams College has offered admission to 257 students under its Early Decision plan reflecting a 35 percent acceptance rate. These students make up nearly 47 percent of the incoming Class of 2021, whose ultimate target size is 550. 728 students applied, a 25 percent increase over last year and a record number for Early Decision.

Yale: Yale welcomed the largest group of admitted early action students in several years, inviting 871 students to join the class of 2021. The admitted students represent 17.1 percent of a pool of 5,086 early applicants. The early action application pool this year is 9 percent larger than last year, an uptick marking the first major increase in early application numbers after a three- year period of relative stagnation.

Do you have Vanderbilt ED1 Stats?

Nothing as yet! We know the decisions were available online 12/15 but they haven’t released any results stats at this point. We look to update each day so stay tuned.